The axial skeleton comprises the spine and the joints connecting the bottom of the spine to the pelvis, known as the sacroiliac joint. axSpA is an autoinflammatory disease that causes pain and swelling in the axial skeleton. 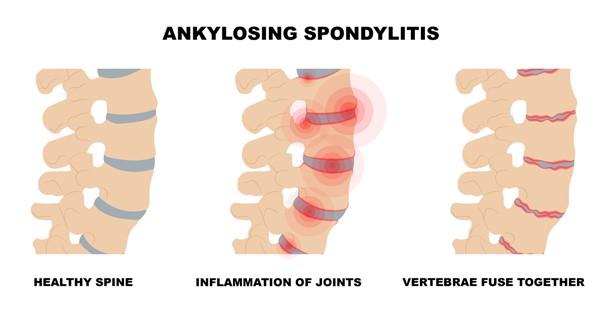 •    Non-radiographic axial spondyloarthritis is an initial disease stage of AS. It is a less severe form of axSpA as the damage includes no radiographic changes to be detected by X-Rays but may be visible on magnetic resonance images.

The prevalence of axial spondyloarthritis is moderate, ranging from 0.1% and 1.4% globally. Still, there is a significant rise in the awareness of the disease, which has led to the development of advanced treatments to cure and relieve the patients' pain. Due to the introduction of new products, increasing awareness of the disease, and rising investments in research and development, experts have predicted significant growth in the axial spondyloarthritis market.

According to the BIS Research market report, the global axial spondyloarthritis market was estimated to be at $1.87 billion in 2021, which is expected to grow with a CAGR of 13.44% and reach $7.8 billion by 2032.

In this article, the symptoms, causes, and emerging advanced treatments are discussed in detail:

Individuals suffering from AxSpA may develop conditions that can co-occur with another primary condition. These conditions and symptoms are described below: 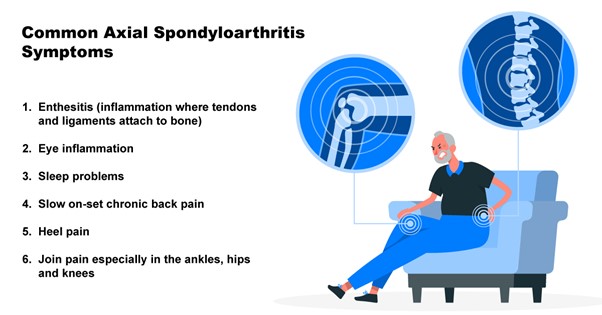 1. Eye inflammation - causes redness and pain in the eyes
2. Psoriasis - causes white patches on the skin that are a different color from a person's skin tone
3. Inflammatory bowel disease (IBD) - a long-term inflammation of the intestinal tract that can cause abdominal pain, diarrhea, and weight loss
4. Axial spondyloarthritis – condition that can lead to heart and blood vessel-related diseases.
5. Sleep apnea - a condition in which the breathing stops and restarts during sleep without the conscious awareness of the person.
6. Osteoporosis - the most common comorbidity of axial spondyloarthritis, which weakens the bones, making them prone to fractures Pain and swelling in the joints of the arms, hands, feet, or legs are the most common symptoms of axial spondyloarthritis.

Extensive research is being done to determine the exact cause of axial spondyloarthritis. Physicians have shed light on a few risk factors, which are discussed below.

1.    Genetic and family history factors- axSpA involves a genetic risk factor that can be passed through the generation. The risk of developing the disease increases if a close relative such as a parent, sibling, or child has it. HLA-B27 is the genetic marker that has been found in more than 90% of the European population with the disease. However, HLA-B27 is less prevalent among African Americans with axSpA.

2.    Environmental factors- Several environmental factors such as exposure to certain infections, toxins, and pollutants; injury to affected joints; changes in the bacteria in the colon; and bowel inflammation can increase the risk of axSpA. However, more research is needed to understand how such factors influence the onset and severity of the disease.

3.    Lifestyle factors- While certain risk factors can't be changed, others can be managed. For instance, healthy lifestyle choices, such as exercising and eating a nutritious diet, are essential while living with axSpA. Exercise is especially critical as it can help the patients relieve symptoms of inflammatory back pain and help in maintaining a flexible spine and joint mobility. Owing to the significant role that bacteria in the gut have on the inflammatory conditions, eating more pre-and probiotic foods such as sauerkraut, yogurt, asparagus, and onions is recommended by the physicians.

The treatment procedure of axial spondyloarthritis (axSpA) aims to relieve pain and stiffness, prevent spinal deformity, delay complications, and help patients lead a daily routine. With the advancements in research and technology, several effective biological agents have emerged in the market. Now, patients have more choices for the effective treatment for the disease.

1.    Tumor Necrosis Factor (TNF) Inhibitors- Inflammation in the body, is caused by the protein known as tumor necrosis factor (TNF). TNF inhibitors help in preventing the production of the inflammatory enzyme TNF and are used to treat axSpA.

2.    Interleukin (IL)-17 Inhibitors- These are immune system medication that blocks IL-17 interference with cell communication by blocking the action of the protein and modulating the immune response. IL-17 cytokines trigger inflammation by signalling to immune cells, with each cytokine targeting a different group of cells. IL-17 inhibitors reduce inflammation by blocking their respective signalling pathways and targeting their respective cytokines.

JAK inhibitors have a shorter half-life, i.e., they remain active in the body for a smaller amount of time when compared to biologics, which helps to prevent side effects very quickly. Currently, there is only one approved JAK inhibitor by the U.S. Food and Drug Administration for ankylosing spondylitis (AS), namely, Xeljanz or Xeljanz XR.

The axial spondyloarthritis disease is relatively rare compared to many prevalent diseases, but it is quite painful and discomforting for the patients suffering from it. Awareness of the causes, symptoms, and all possible available treatments is essential for the management of the disease.