Global Multirotor Drone Market To Fly High In The Near Future 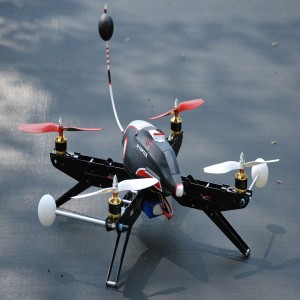 Drones have spread over the world in a short span of time and has attracted the attention of the established a well as novice market players due its application in commercial sector, with latest advancements in this emerging technology. The industries are now ready to move over from semi-autonomous systems to fully autonomous ones and this demand has intensified the competition in the global multirotor drone market.

One of the major companies in the multirotor drone market, AeroVironment, recently announced the launch of its latest drone Quantix, which will help farmers collect and record infield observations. In an interview with AgWired, Matt Strein from AeroVironment mentioned that the drone will be available commercially prior to the end of this year. He also added that “Quantix boasts a hybrid design that combines the aerodynamic efficiency of a fixed-wing aircraft with the flexibility and safety of a multi-rotor drone. Quantix is the first hybrid drone to be introduced to the agricultural marketplace.”

In another development in the global multirotor drone market, Draganfly announced its partnership with SureFire to provide night time operational solutions. In a report by sUAS News it was mentioned that “One of the advantages of Draganfly’s ASM design is that there is space to fly multiple accessories. Various flight testing exercises have been conducted by placing SureFire’s LED unit adjacent to a high quality Sony camera. It has been successfully used in search and rescue exercises and for general night time videography.”

Recognizing the rapid growth in the global multirotor drone market and the trends to be followed by the major players in the market, BIS Research has compiled a report titled ‘Global Multi-Rotor Drone Market - Analysis and Forecast 2016-2022’, which emphasises on the major applications, payloads, and pricing of multirotor drones. According to the analyst at BIS Research, “The global multi-rotor drone market reported a revenue of $1,254.82 million in 2016 with aerial shooting segment accommodating for the highest revenue by 2022. Survey and mapping segment is likely to grow at a highest rate owing to its increasing use in the construction, Geographic Information System (GIS) and others.”

The study also tracks the revenue generation along the lines of each product type, while highlighting the key driving and restraining forces of the market. The market has been bifurcated geographically into different regions, mainly North America, Europe, Asia-Pacific (APAC), and Rest of the World (R.O.W.). According to the analyst, “North America is expected to have the highest market during the forecast period (2016-2022), followed by Europe, Asia and the Rest of the World (RoW). The increase in the demand for multi-rotor drones in the North America is mainly attributed to the moderate regulations by Federal Aviation Administration (FAA). The market players are thus, able to provide services across various applications. The commercial market for multi-rotor drones in the U.S. is increasing for applications such as inspection, precision agriculture and search and rescue operations, among others.”

The key market players are analyzed and profiled in detail in the report. This section covers the business financials, company snapshots, key products & services, major developments, future programs (if any), and finally, individual SWOT analysis of the companies.

Get yourself updated on key emerging technology markets

Know about our market intelligence coverage in key sectors