Disaster Victim Identification: A Crucial Process in the Moment of Crisis

In the grave situations of mass disasters, including manmade and natural such as terrorist attacks, wars and earthquakes, floods, fires, and many more, the impact and loss of life are immense.

The chaos after the disaster becomes difficult to manage as there is massive panic among the victims of the disaster as well as their families. Therefore, an efficient disaster victim identification process becomes crucial to managing the crisis in such a situation.

Human identification is a widely used tool in the disaster victim identification (DVI) process and forensics that helps recognize the belonging of the deceased bodies.

Following a mass tragedy, identifying the deceased takes time and effort. However, the process of disaster victim identification (DVI) comes to aid as it is a thorough identification process with rules based on the international criminal police organization (INTERPOL) standards and legal requirements. Thus, it must be followed during such cases.

The process's goal is to appropriately identify the deceased victims of a disaster or incident when there are several deaths or if the identities of the deceased are in question before returning them to their respective families.

The disaster victim identification process is crucial in disaster management for various reasons. A few reasons are mentioned as follows:

•    Identifying disaster victims is important as it enables the investigators to know about the modus operandi in case of manmade disasters.

•    Comparing the post-mortem and perimortem records to determine the victim's identity can help experts determine the person's true identity and, in some situations, determine the most likely cause of the disaster.

•    Knowing the victim's identity, the extent of their injuries, whether they were discovered post-mortem or antemortem, and the likely cause of death allows for reconstructing the scene of the disaster.

Determining the impact of the disaster and the magnitude of an earthquake, eruption, or explosion made it possible to recreate the disaster's effects.

•    Determining how many people were killed or injured and compiling a list of those missing is an important goal.

•    Determining the number of assets and property damage is also essential.

There are several technical procedures involved in the identification process. Human identification has made immense progress over the past two decades due to the advent of technologies such as Deoxyribonucleic acid (DNA) typing. Forensic DNA typing delivers genetic data from various materials and individuals and is applied to many important issues that confront society.

When other human identification forensic techniques such as anthropology, dactyloscopy, odontology, and medico-legal examinations provide limited information or support further or refute potential associations, DNA typing can be extremely valuable. 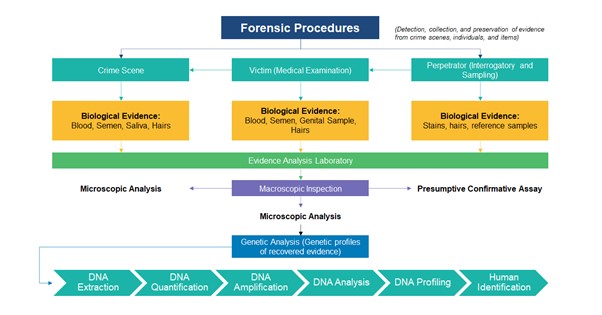 The disaster victim identification process is conducted in four phases as directed by INTERPOL. These steps are mentioned as follows: 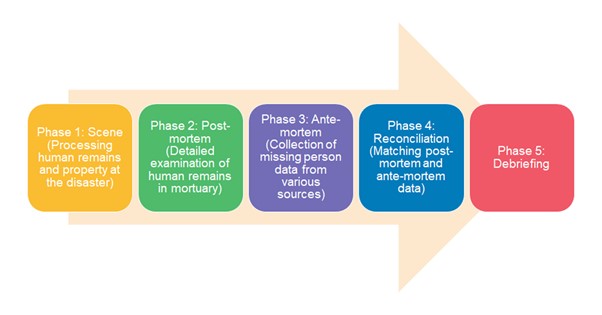 1.    The scene phase: The scene at the site of the disaster is usually chaotic and dangerous, even for the professionals deployed to rescue the victims. Depending on the incident, it may take days or even weeks to completely recover the dead from a mass fatality site. Each deceased victim must receive the respect and care that they deserve.

Disaster or incident scenes may be tumultuous, hazardous, or unsafe for DVI officers to enter for several days following the incident. By evaluating site safety concerns both before accessing the site and on an ongoing basis, every effort is made to ensure the safety of our staff. If any new dangers are found, there can be delays.

2.    Post-mortem phase: A post-mortem examination of the deceased victims may be performed after they have been removed from the scene. All human remains are inspected by experts throughout this procedure to determine the cause of death (if necessary) and look for forensic evidence that could help establish the identity of the deceased. Dental exams, fingerprints, DNA testing, visual cues such as tattoos or scars, and x-rays are a few examples of this type of proof.

As per INTERPOL policy, visual identification alone is not a suitable form of identification. Before releasing the bodies to the relatives, scientific testing must be done to ensure that each deceased victim is identified.

3.    Ante-mortem phase: During this stage, a specialist officer is charged with interviewing the victim's family members and completing an antemortem report, sometimes known as a "yellow form." The interviewer asks a series of pre-planned questions to help identify the deceased victims, which can make the process time-consuming.

There are inquiries concerning the missing person's description, jewelry, clothing, and other possible personal belongings. In order to aid in identification, the interviewer could also want to gather any objects that the missing person may have used, which could yield scientific evidence. They could also ask relatives to give DNA samples to establish a family connection.

4.    Reconciliation phase: Once the post-mortem and antemortem information has been gathered, a team of professionals meets to combine the two data sets to identify the victims who have passed away. An Identification Board then offers the information to the coroner, who ultimately decides who the deceased was.

As soon as a victim is located, the coroner decides when the body can be returned to the family. However, there are specific circumstances when a coroner may decide to detain the victims until they are certain that all victim remains have been correctly identified.

For the families of the victims who have passed away, mass fatality incidents are typically incredibly painful and stressful moments. It is equally difficult for the investigators to organize the scene and produce identification as quickly as possible.

However, there are specific investigative practices that must be followed. Establishing the victim's identity by comparing post-mortem and antemortem records allows one to learn the individual's genuine identity and, in some situations, the probable cause of the disaster in the case of a manmade disaster.

Human identification technologies are crucial to establishing more efficient and accurate procedures. The increasing adoption of NGS in various research fields, high adoption of forensic applications, and technological advancements in the field of molecular techniques and diagnostics tests are leading to the immense growth of the market. 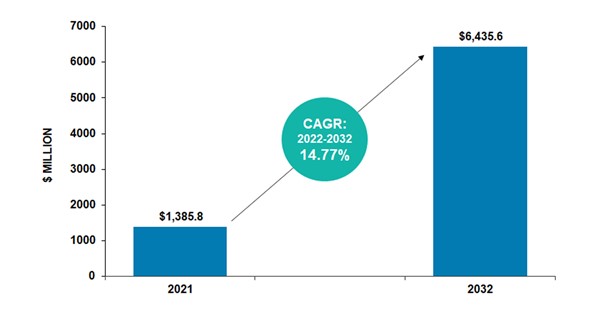