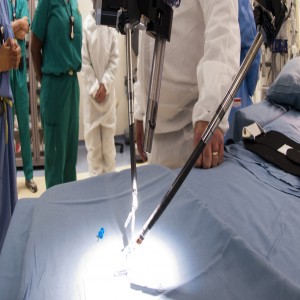 The demand for minimally invasive surgeries and miniature robotics is rising owing to their various advantages such as the decrease in post-surgery pain, reduced risk of infection, less blood loss, and fast recovery time as compared to the traditional open surgery. According to the market intelligence report by BIS Healthcare, titled ‘Global Surgical Robotics Market-Analysis and Forecast (2017- 2025), the market consists of various products segments such as surgical systems, instruments, and accessories & maintenance services. In 2016, instrument and accessories segment generated the highest revenue and is expected to grow at a CAGR of 11.4 % during the forecast period. However, it is estimated that the services segment is going to dominate the market in the coming years, registering a CAGR of 12.9 % during the forecast period.

In February 2018, a leading company of the market, Johnson & Johnson, acquired Orthotaxy, a French robot-assisted surgery company, to create a new robot-assisted platform for Orthopaedic surgeries which is used for partial and total knee replacement. This technology is an integral part of comprehensive orthopedic platforms and being touted as a differentiated technology that helps to improve clinical outcomes and increases patient’s satisfaction.1

In August 2017, British Scientists developed the world’s smallest surgical robot known as ‘Versius,’ which can transform everyday operations for thousands of patients. The robot mimics the human arm and can be used to carry out a wide range of laparoscopic procedures- including hernia repairs, colorectal operations, and prostate and ear, nose and throat surgery, in which a series of small incisions are made to circumvent the need for traditional open surgery.3

At present, market strategies such as business expansions and contracts are leading the market, followed by approvals and certifications. To sustain in the market as well as to build the business strength and outreach, the key players are focusing on forming strategic partnerships and developing low-cost surgical robotics systems that can be used in multiple types of surgical procedures. Some of the leading market players are Think Surgical, Mazor Robotics, Hansen Medical Inc., and Stryker Corporation, among others.