Quantum Dots To Revolutionize Television Market Along With Other End Applications 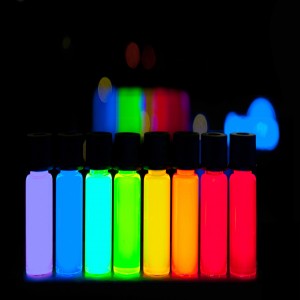 The television industry is witnessing a golden era with the innovations in quantum dots. Big companies are adopting different strategies like collaboration and acquisitions to develop the global quantum dots market, like Hitachi Joined hands with Nanosys to accelerate the quantum dots technology for displays. In a press release, the CEO and President of Nanosys, Jason Hartlove, confirmed its partnership with Hitachi Chemicals, adding "Hitachi's proven expertise in design, engineering and manufacturing of products for consumer electronics including state-of-the-art displays make them a perfect partner to help us revolutionize the Quantum Dot Display industry."

Samsung Electronics is also taking advantage of the potential market, emphasizing on the use of nanocrystals called quantum dots for its new line of Q-series televisions. According to a report by Wired.com, “In Samsung’s new sets, the quantum dots are arranged in a film that fills the screen. Once the backlight activates them, their light passes through the filters that render the colors you see watching Legion. This improves efficiency—instead of having to divide white light, which represents all the wavelengths of light, into precise colors, the filters in a quantum-dot set work with pristine hues. No light is wasted, resulting in brighter, more accurate colors.”

Due to the rapid expansion of this emerging technology, BIS Research has published a report titled ‘Global Quantum Dots Market, Analysis and Forecast: 2017-2022’ with focus on types of quantum dots, namely Cadmium Selenide and Cadmium Sulfide, incorporating a classification of the global quantum dots market on the basis of application, namely QD display, QD medical devices and healthcare application. According to the analyst at BIS Research, “ The quantum dots market is expected to grow at a significant rate during the forecast period. The market is estimated to witness growth at a CAGR of 46.4% over the period of 2016 to 2022. This is due to the growing demand of quantum dots from developing countries which is providing ample growth opportunities for quantum dots market.”

The report delves into the changing dynamics of the market and the new innovations affecting the market. It includes a comprehensive chapter on the key driving and restraining forces in the market, along with viable opportunities to fuel the growth of the market. The report also includes a separate section on the competitive landscape, with market sizing and revenue generation over the period of forecast.

The leading key players of the global quantum dots market have also been analyzed and their performance over the past few years has been tracked. Some of the key players included in the report are Evident Thermoelectrics, Invisage Technologies Inc., Nanoco Group plc, Nanosys Inc., Nn-Labs Llc, Ocean Nanotech Llc, QD Laser Inc., QD Vision Inc., Quantum Material Corporation, and Merck KGaA.