When the Gellert, Lehman, Richardson, and Hurwitz teams' discovered DNA ligases in 1967, it was a turning point in molecular biology. Deoxyribonucleic acid (DNA) ligases represent the fundamental class of enzymes required by all living things to maintain the structural integrity of the genome.

Due to the link between the phosphate group on one DNA strand and the deoxyribose group on the other, the ligase enzyme joins two DNA strands together. The Okazaki fragments that form on the lagging strand during DNA replication are joined by the DNA ligase, which serves the purpose of bonding DNA strands. 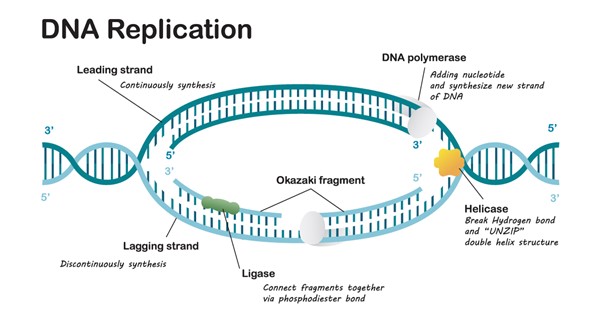 Ligase can link the two DNA segments because it uses an energy molecule to help build a phosphodiester bond between them.

All organisms require ligase enzymes for DNA replication and repair. Ligase enzymes have played an essential role in the development of molecular cloning and several DNA biotechnology applications that followed, such as molecular diagnostics, cancer therapeutics, and solid sequencing techniques.

The discovery that most organisms have multiple ligases that either function in DNA replication (by joining Okazaki fragments) or are dedicated to specific DNA repair pathways, such as nucleotide excision repair, base excision repair, single-strand break repair, or the repair of double-strand breaks via nonhomologous end joining, has significantly benefited the research projects on ligases.

Moreover, due to the factors such as increasing awareness of enzyme-based diagnostic tests, expanding frequency of genetic and infectious disorders on a global scale, and substantial financing for conducting research and development, the global ligase market is expected to grow substantially in the future.

How do ligase enzymes help in DNA replication?

All living things inherit their genetic makeup through DNA replication, due to which two identical copies of the original DNA molecule are created. Essential enzymes such as ligase, helicase, and gyrase aid in the DNA's unwinding as replication starts at specified points in the genome.

During the process, a single DNA duplex splits into four separate single-stranded DNA molecules. Different enzymes carry out a variety of tasks to help in full replication.

The insertion of the RNA primer via the primase enzyme starts the replication of DNA. The DNA polymerase starts adding nucleotides to the leading strand at the 3? ends of the primer.

Once the primer between the Okazaki fragments has been eliminated, the function of the DNA ligase is to close the gaps by generating phosphodiester linkages. Through ligation, the 3? and 5? ends of two separate strands are linked by removing the pyrophosphate from the triphosphate.

Contrarily, DNA replication involves ligation; however, this is not the case with double-stranded DNA or blunt-ended dsDNA.

Since DNA replication and nearly all DNA repair pathways involve DNA ligation, DNA ligases are an appealing target for the creation of inhibitors that increase the activity of genotoxic drugs used to treat cancer.

The presence of numerous species of DNA ligases with various but overlapping biological functions in human cells and the crucial functions of DNA ligases in the replication and maintenance of nuclear and mitochondrial genomes confound the attempt of drug discovery.

In one of these instances, the DNA ligase inhibitor L67 was employed in conjunction with a poly adenosine diphosphate-ribose polymerase (PARP) inhibitor to target a DNA repair defect that could be recognized based on the changed expression of the human DNA ligases in cancer cell lines and clinical samples from leukemia patients.

As a result, DNA ligase inhibitors are being developed further as therapeutics for targeting DNA repair deficiencies in cancer cells.

DNA ligases are important to maintain genomic integrity. With the advancements in biotechnology, researchers are tapping into more efficient applications of the DNA ligase enzymes and their crucial role in the repair and maintenance of genes.