Types of Therapeutics for Narcolepsy and their Efficacy

Narcolepsy is a chronic and rare neurological disorder that causes extreme daytime sleepiness and unexpected sleep attacks. Regardless of the situation, people suffering from narcolepsy frequently have trouble staying up for extended periods.

The symptoms of narcolepsy might seriously interfere with the regular activities of patients, such as disabling effects on day-to-day work, causing problems at work, and harming one's mental health.

Currently, available therapies are all symptom-centric and do not cure the condition. The current treatments are not much efficient in addressing the whole spectrum of symptoms, and the little improvements in narcoleptic patients' quality of life have spurred the development of several novel treatments in recent years.

Challenges such as adverse effects of medicines, low efficacy, and problems with cost and insurance are some of the major concerns with the current medicines. The drawbacks of the existing therapeutic alternatives highlight the necessity of comprehensive and specialized care for narcoleptics.

The narcolepsy therapeutics market is expected to grow substantially, which can be attributed to the factors such as the rising number of narcolepsy diagnoses, growing awareness and interaction among patients and physicians, increasing adoption of emerging distinctive therapies, and increasing research funding from leading organizations globally.

Moreover, limitations associated with the available treatment options and scope for the development of a more effective, tolerable, and novel mechanism of action therapeutics are also significant reasons attributing to the growth of the market.

This article discusses the evidence-based pharmaceutical therapeutics for narcolepsy, its causes, and its symptoms.

Although the specific cause of Narcolepsy is not known to medical professionals yet, low quantities of the chemical hypocretin have been observed in those with type 1 narcolepsy.

Hypocretin is a crucial neurochemical that aids in controlling wakefulness and REM sleep. Those who have cataplexy have extremely low amounts of hypocretin.

The exact reason for the loss of hypocretin-producing brain cells is also unknown. Researchers believe it may be the result of an immunological response.

Additionally, genetics may contribute to the onset of narcolepsy. However, there is only a 1% chance that a parent may pass this condition on to their offspring. 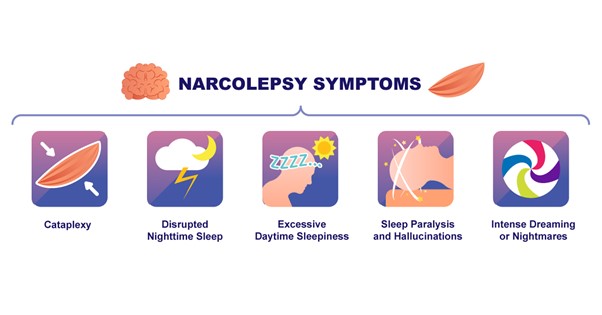 1.    Excessive daytime sleepiness (EDS): EDS generally makes it difficult to carry out daily tasks, even with enough sleep at night. Concentration may be challenging due to low energy, and people experience memory loss and fatigue or depression.

2.    Cataplexy: Depending on the muscles involved, this might result in issues ranging from slurred speech to total body collapse. It is frequently brought on by strong emotions such as surprise, laughing, or rage. 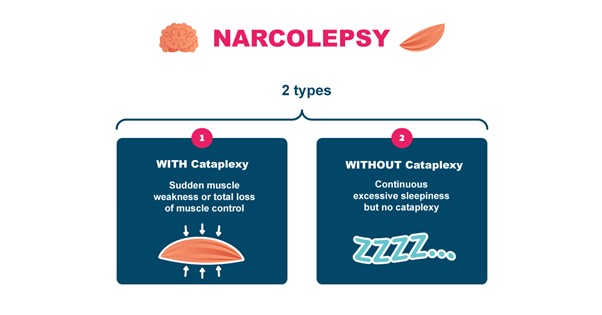 4.    Sleep paralysis: During these episodes, people are unable to move or speak. The duration of these episodes ranges from a few seconds to several minutes.

Orexin neurons are irreparably destroyed in type 1 narcolepsy, which results in its pathophysiology. The unique therapies target a variety of neurotransmitters, and their efficacy depends on the dosage and subtle variations in drug responses.

Typically, norepinephrine dopamine inhibitors and central nervous system stimulants such as armodafinil, modafinil, and pitolisant are used to treat EDS. In contrast, sodium oxybate and antidepressants work best for cataplexy and other symptoms. 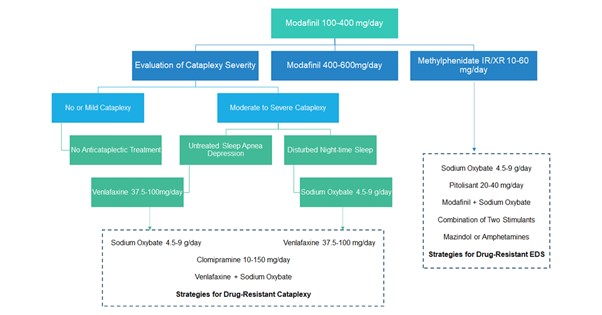 1.    Stimulants: The main method of treatment for narcolepsy is the use of drugs that stimulate the central nervous system. When treating narcolepsy, doctors frequently start with modafinil (Provigil) or armodafinil (Nuvigil). Compared to earlier stimulants, modafinil and armodafinil are less addictive and do not cause the highs and lows that are frequently linked with them. Although they are rare, side effects such as headaches, nausea, or anxiety can be experienced.

The more recent stimulants, i.e., Sunosi (solriamfetol) and pitolisant (Wakix), are used to treat anxiety, headaches, and narcolepsy. Pitolisant may be beneficial for cataplexy as well.

Methylphenidate (Aptensio XR, Concerta, Ritalin, etc.) or other amphetamines are prescribed to some patients. Despite their potential for addiction, these drugs are quite effective. They could result in negative side effects such as anxiety and palpitations.

2.    Sleep-suppressing drugs: Selective serotonin reuptake inhibitors (SSRIs) or serotonin and norepinephrine reuptake inhibitors (SNRIs) are the sleep-suppressing drugs frequently prescribed by doctors to treat the symptoms of cataplexy, hallucinations, and sleep paralysis. They consist of venlafaxine and fluoxetine (Prozac, Sarafem, Effexor XR). Weight gain, sleeplessness, and digestive issues are the possible side effects of these drugs.

3.    Tricyclic antidepressants: Few antidepressants, such as clomipramine (Anafranil), imipramine (Tofranil), and protriptyline (Vivactil), are beneficial for cataplexy, but many people report side effects of these drugs, such as dry mouth and dizziness.

4.    Sodium oxybate (Xyrem): This drug has been quite successful for cataplexy treatment. Sodium oxybate aids in improving nocturnal sleep, which is frequently inadequate in narcolepsy. It may also assist in managing daytime sleepiness when used in large amounts. It needs to be taken twice, i.e., once before night and then up to four hours later.

Xyrem's adverse effects can include nausea, bedwetting, and aggravation of sleepwalking. Combining sodium oxybate with other sedatives, narcotic painkillers, or alcohol might cause respiratory problems, a coma, and even death.

Narcolepsy is a chronic condition affecting the neurological functioning of the brain. It results in the loss of the brain’s ability to control the circadian rhythm, also known as the sleep and wake cycle.

Drugs that affect the histamine chemical system, hypocretin replacement, hypocretin gene therapy, and immunotherapy are among the new treatments for narcolepsy that are being studied, although they require more research.