The companies that are profiled have been selected based on inputs gathered from primary experts and analyzing company coverage, product portfolio, and market penetration.

Some of the prominent names established in this market are:

Growth/Marketing Strategy: The global agriculture autonomous robots market has seen major development by key players operating in the market, such as business expansion, partnership, collaboration, and joint venture. The favored strategy for the companies has been product partnerships, joint ventures, and product launches to strengthen their position in the agriculture autonomous robots market. For instance, in November 2020, Robert Bosch GmbH and BASF SE began a joint venture for digital technologies in the agricultural sector. They jointly developed a smart spraying technology to apply herbicide on weeds without spraying unaffected areas of crops.

•    With an increased worldwide focus on achieving the global food demand, the shift to digital, smart, and data-driven products in the agriculture sectors brings significant sales and financing opportunities. The shift is more prominent in automation and robotics segments in regions such as North America and Europe.
•    Furthermore, agriculture autonomous robots have a moderate to high impact on crop protection systems to reduce crop losses due to crop diseases and pest infestations.

In the wake of the pandemic, labor shortages have caused disruptions in the agricultural processes, thereby leading every country to re-emphasize food security and increase domestic food production. With an aim to solve labor shortages, the increased application of automated technologies such as sensors, data analytics, robotics, and others have been introduced into the production system. Each country continued to promote policies on increasing the adoption of agriculture autonomous robots techniques, which have proved to be the appropriate solution.

Dairy farm management is one of the major applications of agriculture autonomous robots owing to the high adoption of milking robots in Europe and North America.

The milking robots segment is expected to grow at a CAGR of 20.34% during the forecast period 2022-2027 due to the rising use of automation in dairy farms. These robots increase the efficiency of farm operations by reducing the overall cost. Hence, farmers are inclining toward adopting milking robots and reducing dependence on manual labor.

North America generated the highest revenue of $1.33 billion in 2021, which is attributed to the R&D advancements and supporting government regulations in the region. Europe is an attractive region for the agriculture autonomous robots market because of the availability of the different market fragments.

•    In April 2022, Verdant Robotics announced a robotic solution for farms that can help in spraying and weeding simultaneously with the help of machine learning, AI perception, and robotics technology.
•    In December 2021, Lely collaborated with Dutch based Connectera B.V. With this collaboration, Lely aims to use Connecterra B.V.’s advancements in machine learning and artificial intelligence to provide more insights to farmers. Also, the technologies aid in integrating farm technologies with artificial intelligence for developing farm management systems.
•    In October 2021, BouMatic acquired SAC Group, a well-reputed full-line producer of complete milking systems for cows, sheep, and goats. This acquisition is expected to aid BouMatic in expanding its global presence and product catalogue.
•    In November 2020, Robert Bosch GmbH and BASF SE began a joint venture for digital technologies in the agricultural sector. They jointly developed a smart spraying technology to apply herbicide on weeds without spraying unaffected areas of crops.
•    In October 2020, AGCO Corporation announced the launch of Fendt Xaver, which comes with an embedded solution developed by the AGCO Group and a seed unit for precision planting. It is equipped with the Vario Guide Lane guidance system, which controls the robot with centimetre accuracy.

Following are the demand drivers for the agriculture autonomous robots market:

The market is expected to face some limitations too due to the following challenges: 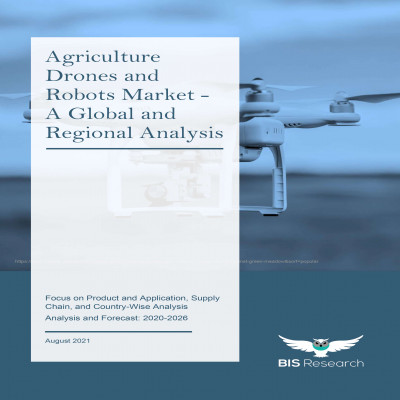 Agriculture Drones and Robots Market - A Global and Regional Analysis: Focus on Product and Applicat

The global agriculture drones and robots market is expected to reach $30.08 billion by 2026,...