The operating rooms always require specialized and technologically advanced lighting systems, as these systems play a significant role in a successful surgical procedure. Poor lighting spectrum may result into poor performance of the surgical team and impose adverse effect on the working environment and wellbeing of the patient.

Due to the specialized lighting requirement of the medical and surgical environments, dedicated medical and surgical lighting systems have been developed by the medical lighting system providers. These specialized light systems ensure shadow free illuminated areas along with true color rendering thus, enabling the surgeons to have unobstructed view of the body part under observation or examination and differentiate unhealthy tissues from the healthy ones. Further, it ensures minimal thermal radiations and low maintenance and better energy efficiency.

The global medical lighting market is growing exponentially due to the increasing adoption rate of the technologically advanced medical lights to cater the growing hospital chain. Furthermore, technological advancement in the developed countries and due to increasing disposable income in the emerging economies, such as Asia- Pacific and Latin America, the government is playing an active role in enhancing the healthcare infrastructure and facilities. The medical lighting systems provide optimal illumination during the surgical and medical examination procedures, such as neurosurgery, dental surgery, endoscopic surgery and optical surgery, among others. These systems provide optimally bright and shadow free high intensity light which is perfect for the visualization of small and low contrast objects within the body cavity during the surgeries.

Remarkable technological advances in materials and energy sources have revolutionized the surgical and exam lighting. Earlier, the surgeons and office-based physicians labored under the clumsy, excessively hot incandescent light domes but nowadays, sophisticated systems are used involving new energy sources such as halogen (quartz and tungsten), gas mixtures such as xenon plasma and the newest light emitting diodes (LEDs) technologies.

Due to restrictive budget for the hospitals and medical facilities, the incorporation of technologically advanced and energy efficient LEDs provides significant benefits both at the operational and financial level. LEDs are growing in popularity for their longevity and their ability to provide more light with less heat. The lighting technology is beginning to change from halogen or xenon lamps to LED arrays which promises the benefits of dramatically increased life, reduced energy consumption and cooler operating temperatures.

Most of the hospitals and other medical centers are witnessing an upgrade to a nascent LED lighting system can provide a positive impact on almost every level of hospitals functioning. Furthermore, these LED lighting technologies had also witnessed significant financial benefits in terms of energy saving, as it can reduce the 70% lighting expenditures and can also result into significant improvements in terms of patient recovery times and contribute by reducing the chances of errors in the surgical outputs.

The operating rooms are generally comprised of important medical devices such as patient monitoring systems along with the specially designed lighting fixtures for better illumination throughout the complex surgical procedures. These advanced medical lighting systems are used in almost every surgical procedure such as neurosurgery, cardio surgery, orthopedic, and gynecology surgeries, among others, across every possible application areas, such as within the operating rooms, examination rooms and ICUs to properly illuminate the areas under consideration. Proper illumination provides the surgeons and the other medical professionals, to obtain a better resolution of the surgical area and enables the surgical team in completing the needed medical task to be done more effectively and with improved results.

The product segment comprises of surgical lighting system (ceiling mounted, headlights, mobile and wall mounted among others), examination lights (mobile, wall mounted, ceiling mounted, rail mounted, table top and floor standing among others) and specialty lighting & accessories. The surgical lighting segment constituted the highest market value in 2017, growing at the CAGR of 5.8% during the forecast period 2018-2025. However, specialty lights are expected to grow at the highest CAGR of 6.5% during the forecast period 2018-2026.

The operating rooms/surgical suites acquired the highest market value in 2017, growing at the CAGR of 5.5% during the forecast period 2018-2026.

Proper lighting in a medical facility plays a significant role to make the patient calm during the treatment and provide better illumination to the medical practitioners and the staff members to improve the productivity. The hospitals and healthcare institutions face enormous pressure to find the lighting products that offer minimum carbon emissions and reduced energy consumption. The lighting solution providers are now offering a bundle of mixed mode system using intelligent sensors technology. The mixed mode system allows natural and artificial light in the premises to turn on and off automatically according to the patients’, visitors’ and staff’s movement and allows the adjustment of the intensity of lights according to the amount of the daylight present at any point of time. It results in significant reduction in electricity usage and thereby emitting minimum carbon dioxide.

A plethora of opportunities is presented from the emerging countries such as India, China, U.A.E and Mexico, among others. This can be attributed to the increasing government support, rising disposable income, rising number of hospitals in the emerging economies and technological advancement in lighting industry, among others. According to the World Bank, a total of 19,217 hospitals and healthcare facilities were registered in 177 countries, which was much higher as compared to the previous year (2016).

The market for the surgical lights had witnessed significant growth in three to four years down the line. The growth can be attributed to the active involvement of industry players and government in technological advancement in medical lighting spectrum and further rise in the number of surgical centers, including ambulatory surgical centers. Moreover, the increasing demand for better healthcare facilities and increasing number of hospitals in emerging economies are also spurring the growth of the medical lighting technologies market. However, high costs of LEDs lighting fixtures, economic slowdown in some regions, such as Africa and other Caribbean regions and lack of awareness regarding the advancements in the lighting technologies serves as a restraint for the growth of this market.

Among all the factors, active role of government in enhancing the healthcare infrastructure across several emerging economies is one of the prominent drivers for the growth of medical lighting technologies market. For instance, the governments in China, India, Japan, Brazil and Russia are actively participating in providing better healthcare facilities to their citizens and even offering favorable reimbursement and subsidies to increase the adoption rate of technologically advanced medical facilities across increasing hospital chain. The hospitals in the developed areas of North America and Europe are not only trying to get equipped with essential lighting for operations but also focused on utilizing the energy more efficiently with the usage of advanced LED technologies.

The predominant strategy employed by the players to enter and/or expand in the emerging markets has been launch of new products. This market strategy accounted for approximately 58% of the total key developments in the global medical lighting technologies market. Several small-medium enterprises are frequently updating their product portfolio with innovative medical lighting technologies, to sustain in the competition.

Key Questions Answered in this Report:

Due to restrictive budget for hospitals and medical facilities, the incorporation of technologically advanced and energy efficient LEDs provides significant benefits both at operational and financial level. LEDs are growing in popularity for their longevity and their ability to provide more light with lesser heat. The surgical lighting is currently during a radical technical transformation. The lighting technology is beginning to change from halogen or xenon lamps to LED arrays which promises the benefits of dramatically increased life, reduced energy consumption and cooler operating temperatures. However, most of the developments with LEDs has been in the surgical lighting but technology would rapidly move into the exam lighting as well. These new energy sources offer improvements in bulb life, efficiency and intensity and had provided more choices in performance as well as design to those facilities searching for better lighting products.

The demand for the medical lighting system has increased owing to the infrastructural development of multispecialty hospitals across countries. The usage of advanced lighting system is witnessing a rapid growth in hospitals due to the wide adoption of the lighting products in various hospital applications. The increasing investment in the healthcare institutions by the government of various countries is the major factor for the growth of medical lighting market. One of the most important and critical parameter in the development and enhancement of hospital infrastructure is the efficient implementation of advanced lighting systems. Proper lighting spectrum in the hospitals significantly impact each level of activities in the hospitals. It provides significant illumination to help the surgical team to perform visual tasks in surgical procedures more efficiently and further helps in reducing the chances of medical errors and maintaining the body’s circadian system.

This research study includes an extensive analysis of the global medical lighting technologies market by product, application, technology and geographical regions, allowing the researcher to develop a comprehensive outlook of the market. Each of these segments has been analyzed based on their current and future market size, considering the macro and micro environmental factors.

The market report presents a detailed and investigative study of the entire market and provides a comprehensive insight into various forms of development, trends and the key market participants. While highlighting the key driving and restraining forces for this dynamic market, the report also provides a comprehensive section on competitive landscape, market share analysis, competitive benchmarking, and the position of the competitors within the global medical lighting technologies market. 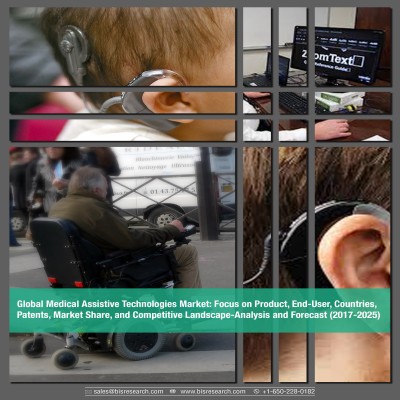 The global medical assistive technologies market is expected to grow over $24.41 Billion by...